20 January 2021 Together with Devespresso Games, the developer of popular The Coma series, we are delighted to announce the launch of Scarlet Hood and the Wicked Wood on Steam Early Access on February 10.

The initial launch will reveal the first four chapters of the game, followed by several updates including a content update with additional chapters in late February. The final chapter, featuring multiple endings, will arrive with the official release scheduled for March. 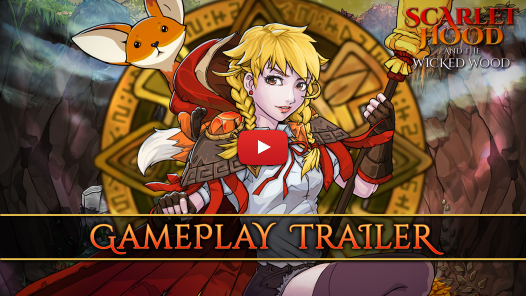 Scarlet, the protagonist and a diva in the making, awakes in the realm of Glome after being flung over by a rogue tornado. She discovers an electrifying world brimming with magic, beauty, and artifacts from a mysterious bygone culture. Her strange journey begins when she takes up the mantle of the Red Witch and leads a troupe of Munchkins through the forbidden Wicked Wood. In a world full of riddles and wonders, she encounters witches, a tin knight, talking beasts, monsters, and many fearsome creatures to overcome.

The fledgling witch soon discovers a Recursion Hex has her reliving the same day. However, each death presents new opportunities to branch the adventure in exciting new ways. Ultimately, her decisions lead to multiple endings. In the deep wood, where a bad hungry wolf roams and a wicked witch casts her evil spells, Scarlet must rely on her wits and a cute fox, acting as her pathfinder, to overcome the disasters that await her at every turn.

The only way to get through the wood is by solving puzzles that require logic, or by finding clues that are scattered across the wood, in the shapes of items, conversation with the NPCs, writings on the walls, and much more. If stuck, players are encouraged to visit the community on Steam or Devespresso's Discord server to discuss and find solutions to the puzzles with other players.

Check out the new Gameplay Trailer here and a few puzzle screens below. Also, feel free to join our Discord server!
Read more

Releasing for PS4 and Nintendo Switch on January 29

14 January 2021 Good news for horror fans: The first-person horror game Silver Chains is coming to PlayStation®4 and Nintendo Switch in just two weeks from now - the release date for both platforms is locked in for January 29th.

Its story: After a car accident, the main protagonist Peter finds himself trapped in an old English manor. He went there as it was his only change to get help and shelter for the night, even if it didn't look too welcoming. Soon he realizes that he's not alone in there, something is lurking in the shadows. To find a way out, he explores the ancient building and it's getting weirder with every door he's leaving behind...

Using Unreal Engine 4, Silver Chains' graphics bring to life the hauntingly beautiful interiors of an early 20th century English manor. The Victorian architecture plays its part in creating an eerie atmosphere which will keep you on the edge of your seat as you unravel the mysteries of this place and uncover pure madness.

Check out the Console Trailer that will give you the creeps by revealing some of the game's supernatural creatures. Take a seat, crank up the volume and see for yourself!
Read more

Shooter fans, listen up: Headup releases two new games on the PlayStation Store today, just in time for spicing up the Festive period with some action:

First we have Ridig Force Redux. Arm your fighter in this classic side-scrolling shoot’em up in modern 3D! Blast off to take down hordes of infected aliens and dreadful machines programmed to wage an intergalactic war against mankind, just like the good ol’ days.

Completely redeveloped in Unity by the developers com8com1, Rigid Force Redux offers ultra-smooth arcade action in 60 FPS, with intense battles, stunning effects, detailed environments and an electrifying synthwave soundtrack by DREAMTIME feat. Michael Chait. The game is available for €15,99 / $15.99 / £12.99 on the PlayStation®Store today. Watch its official Accolades Trailer below! 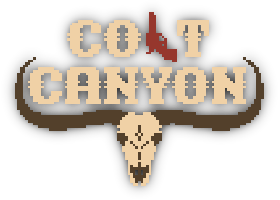 And the second one is Colt Canyon, a stylish 2D pixel art twin-stick shooter with roguelike elements. Get ready to saddle up and slap leather against some ornery varmints! Control a cowboy, or one of the many other playable characters, whose mission it is to save their kidnapped partner from ruthless bandits.

Take your revolver, knife, and TNT and shoot your way through a hostile canyon full of hidden treasures, weapons, obstacles, and all kinds of bloodthirsty scums. Save your beloved one as well as other prisoners along the way to receive helpful upgrades, or their support as your armed companions. Speaking of armed support, you can also enjoy Colt Canyon together with a friend in local two-player co-op mode! The game is available on the PlayStation®Store today, at a price of €19,99 / $19.99 / £16.99. Here as well, check out the PS4 Launch Trailer below!

Developed by the Team Behind the Popular 'The Coma' Series, Arriving on Steam in February

18 December 2020 Together with Devespresso Games, the developer of popular The Coma series, we are delighted to announce the upcoming launch of Scarlet Hood and the Wicked Wood, a new story-driven fantasy puzzle game with multiple endings, on Steam Early Access in February.

Scarlet, the protagonist and a rock diva in the making, awakes in the realm of Glome after being flung over by a rogue tornado. She discovers a vibrant world brimming with magic, beauty, and artifacts from a mysterious bygone culture. Her strange journey begins when she takes up the mantle of the Red Witch and leads a troupe of Munchkins through the forbidden Wicked Wood. In a world full of riddles and wonders, she encounters witches, tin knights, talking beasts, monsters, and many fearsome creatures to overcome.

The fledgling witch soon discovers a Recursion Hex has her reliving the same day. However, each death presents new opportunities to branch the adventure in exciting new ways. Ultimately, her decisions lead to multiple endings. In the deep wood, where a bad hungry wolf roams and a wicked witch casts her evil spells, Scarlet must rely on her wits and a small fox, acting as her pathfinder, to overcome the disasters that await her at every turn. 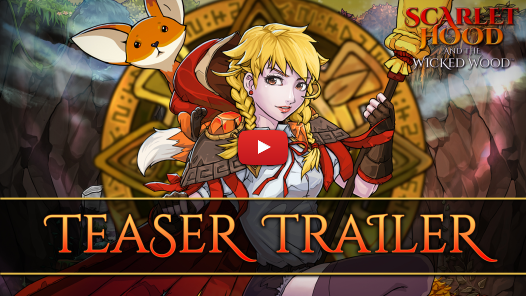 About Scarlet Hood and the Wicked Wood

Scarlet Hood and the Wicked Wood is a story-driven adventure game. As Scarlet, you must relive seven days of misfortune, and make a series of decisions to guide your Munchkin troupe safely out of the Wicked Wood. Experience branching outcomes based on your decisions. Most importantly, immerse yourself in a bewitching story of fantastic adventure!

​​​​​​​If you thought Halloween was the only time to play Pumpkin Jack, think again!

17 December 2020 With today’s free Xmas Update, the critically-acclaimed 3rd-person platformer is a perfect fit for the upcoming festive period. If you missed out on Pumpkin Jack at Halloween, this is the ideal opportunity to see for yourself what all the screaming was about.

Thanks to the generosity of Santa, the update contains a new Christmas outfit for Jack which when worn makes it snow, various decorative elements in the levels (like snowmen) as well as five festive gifts in each level to collect throughout the game - finding all five in a level will unlock additional awesome surprises! 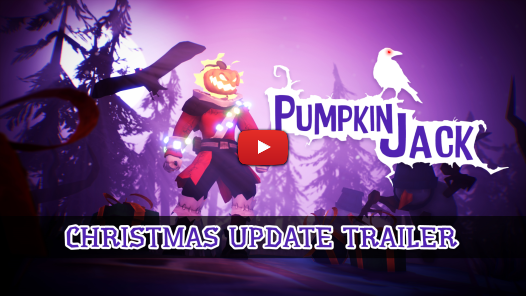 In addition to the update itself, there is a limited period discount for Nintendo Switch and PC versions - 30% off on the Nintendo eShop EU/NA, while Steam and GOG get 25% off, and the Epic Games Store 20%. One more reason for getting the indie gem over the Festive period.

Check out the new update now (again... it’s free!) and tell your audience - Jack is back with style! Also, take a look at the all-new Christmas Update Trailer.

If you like to get more information about the update, please check Jack’s own naughty announcement on Steam: https://steamcommunity.com/app/1186640
Read more

Set in the Walker-infested, post-apocalyptic world of AMC's The Walking Dead, the game promises to smoke the brains of TV series fans and veteran Bridge Constructor players alike, as well as any who seek a challenge on their shiny new console. With PS4/PS5 Cross-Buy, the puzzle game can be enjoyed on both consoles for $9.99 / €9.99 / £7.99.

Bridge Constructor: The Walking Dead is also available on Xbox Series X & Xbox One (also featuring Cross-Buy), Nintendo Switch, iOS and Android, while PC, Mac and Linux users will get the game on Steam, the Epic Games Store and GOG. 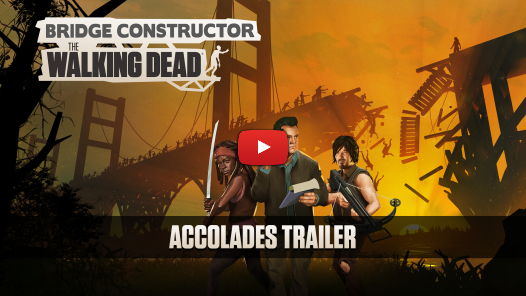 Gather your Friends, Explore, Loot, and Build Your Own Realm

Headup has been around for over a decade, porting and publishing high quality independent games from external development teams. Now we are treading into uncharted waters by delivering their first fully internal production, launching into Early Access on Steam. 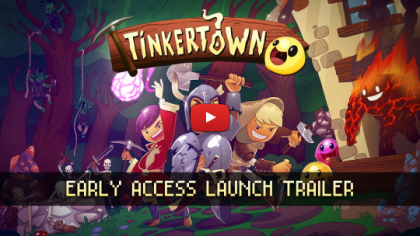 With Tinkertown, we are realizing a design idea which has been floating in our heads since the beginning of their partnership with Re-Logic years ago for whom Headup created the PC Collector’s Edition of Terraria. Huge respect for this genre and long hours lovingly spent exploring the Kingdom of Hyrule in our childhood has led to the clear vision: Creating a cheerful sandbox game in the aesthetics of the old 16bit RPGs but leveraging the possibilities of modern game development such as visual effects and online multiplayer.

Tinkertown is funded by the Federal Ministry of Transport and Digital Infrastructure as part of the federal government's computer games funding program with a total of €153,669.
Read more

Headup and AMC are pleased to announce that Bridge Constructor: The Walking Dead, the mashup nobody saw coming and the latest instalment of the Bridge Constructor™ franchise, is releasing today across all major systems, including the Xbox Series X, as well as PC, Mac, Linux, iOS, Android, PlayStation®4, Xbox One, and Nintendo Switch. A version for PS5 will follow soon after, cross-buy included!

Bridge Constructor: The Walking Dead is priced at

There is a launch discount running across Steam, GOG, Epic and for Nintendo Switch until November 26th. Steam users who own one or more games from the Bridge Constructor Franchise can save another 10% up until November 26th. More information on the Loyalty discount can be found on the Steam store page. 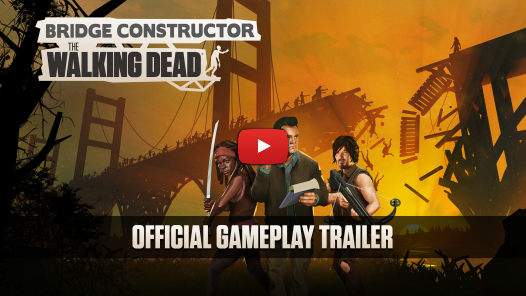 Join a group of survivors as they fight against hordes of undead walkers and a hostile human community. Build bridges and other constructions through bleak landscapes and ruined structures. Team up with fan-favorite characters like Daryl, Michonne and Eugene, and create safe passage for iconic vehicles from the series. Use movable level objects, explosives and baits to your advantage as you lure walkers into lethal traps and guide your survivors to safety. Enjoy the physics-based frenzy and ragdoll animations as walkers succumb to the forces of gravity.